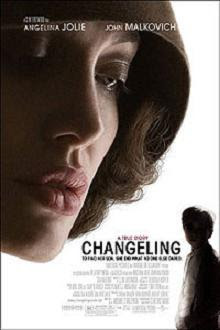 I went to see The Changeling after voting Tuesday.

Now, you all probably know that I don't favor violent movies, and I'm not good with mysteries either. Any time I'm tempted to close my eyes, and plug my fingers into my ears while I sing la, la, la, la really loud, I know it would be a waste of money. It would also prompt other movie goes to throw stuff at me and yell obscenities.

But, what you don't know, is that I love non-fiction, biographies and history....above all else. I have to make a disclaimer here. Certain movies that claim to be biographical and historical are not, in my opinion. And please take note, I make that judgement call all by myself because I can.....and I pay for my own movie tickets. That's right folks, I finally ran out of gift certificates from JJ. 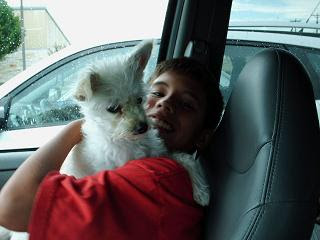 On to my review of The Changeling.....

It starts in Los Angeles California in March, 1928. Christine Collins and her son Walter live at 200 23rd Street in Lincoln Heights. Ironically, that's a couple of blocks from where my mother-in-law grew up, and where she lived when my husband was growing up on Johnston St.

LA was very beautiful back then...but there was a dark side. Police corruption.

John Malkovich plays a Presbyterian Minister who is on a crusade against the LAPD, and uses his pulpit and his radio broadcast to rail against them. He becomes very active throughout the story.

When Christine, a telephone operator supervisor for Pacific Telephone (where I worked in the 60's) is called into work on a Saturday, Walter is left alone. Walter is a quite boy, and while disappointed that his mother has to work, is content with staying home alone.

When Christine comes home, Walt is gone....his sandwich that she made him for lunch is still in the ice box. She immediately searches the house and surrounding neighborhood....finally she calls the LAPD. They have a strict 24 hour waiting period before they will take a missing persons report.

The search goes forward for Walt,and in August, the police notify Christine that her son had been found alive. the media swarm, and the crowd is quite large when she meets her lost son at Union Station. She doesn't say anything, but she is a bit confused with all the attention, and the police pushing her to take pictures with her son.... 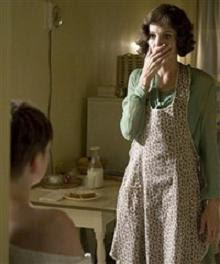 When she voices her doubts, they accuse her of shirking her duties as a mother....she brings the "new Walt" into her home, and when she brings him a towel he stands up in the tub, revealing the fact that he is circumcised...her son wasn't. she immediately stands him against the wall, and notices that the notch where she last measured her son is three inches higher than this Walter.

The more Christine protests, the harder life gets as the LAPD go to extreme measures to suppress her. I don't want to give any more details....and I apologize if I've given too many.

I loved this movie...it was very disturbing, but a true story. I can't believe I never knew about this story.

It gets a big thumbs up and five stars.....I wouldn't be surprised if there were some Oscars awarded to this film.

** SPOILER LINKS**
Additional links to newspaper pictures and accounts of the real story....for those of you who absolutely won't be going to the theatre.

Something else we have in common, I love non-fiction, books and movies.
This sounds really good. Love your reviews. You should get paid for them!!

I usually don't like the same movies as you, but this one was very good. Nice review.

Holy cow. You said ice box. Your Passport to Mathews will be waiting for you at the airport. Along with a limosine. All this based on your correct usage of the term in previous decades applied to a fridge.

I really want to see this movie, but given my track record of making it to the theater, not sure I'll get there. Madison also wants to see it. She's pretty mature for a very-soon-to-be 13 year old, but I think it may be a bit much for her. Don't like the idea of taking her to a rated-r movie either. Since you've seen the movie, thoughts?

Great review, I woke up eager to see if it was posted. I don't particularly like Angelina Jolie movies at all, but this looks interesting. I will never make it to the theatre (& my dogs never buy me anything) so I read the additional spoiler links.

Briana, it's rated R for the violence. There is no sex or vulgarity. It's a true story and if it happened today, Madison would know about it.

Hollywood, I'm not a fan of Angelina Jolie either, but it's worth seeing.

OH, and Suz? You can pay me if you want.

CBW, I hate to admit it, but I remember my grandmother's ice box at her summer beach cottage in NH, and the ice man!

BHE, any excuse is good enough! Personally, I'd rather go on boys night out!!

Colin, how come you never invited me to the movies with you and your buddies?

hmm..I just don't know if I want to see this. Your review didn't give away more than the trailer..so it's not that. I don't know. Maybe because the whole thing pisses me off...you don't give a woman a child that isn't her child.. Corrupt police stories are great but that it involves a child just..uggg.. So you see that I'm a little torn here. I still haven't watched the David Pearl story..just cause I know that is going to make me mad too.
I'd rather have movies make me laugh or cry..not feel angry.
Follow me?
Personally I can't wait for James Bond, Madagascar, Yes Man..and the new Adam Sandler one..

I want to go see it! I wish I could go tonight. In fact, I possibly could, because my Dad just picked up Kaishon. BUT, Gary has to leave for work tomorrow at 5:00 am so I don't think I can talk him into it, and I hate going to movies alone. Someday, I hope to be as cool as you : )>!