Warning, this movie is rated R......but should be rated X 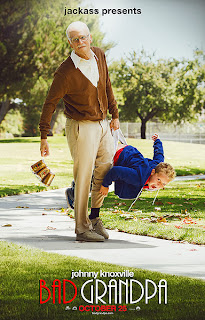 Just so you know, if you want to see this movie, don't go with your son-in-law or any other male who isn't your significant other.   It can be a tad embarrassing....in a very funny way. Also, this movie is not for kids....and if your teenagers start laughing uncontrollably, that means they probably went to see Bad Grandpa.


Jackass' Johnny Knoxville stars as Irving Zisman, his old man character.  The movie opens with Irving getting the bad news that his wife has passed away.  At her funeral, attended by only strangers of course, his daughter shows up with his grandson Billy, (played by Jackson Nicoll).  She tells him she has to go back to jail and asks him to take Billy to his father in North Carolina.  Reluctantly, that's what Irving does... 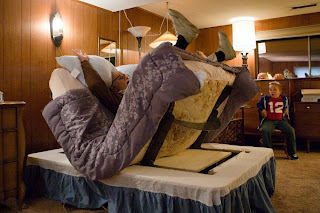 But, before they can actually hit the road, Irving decides to have an estate sale.   Where his demonstration of how his marital bed raises up.
Along the way, there are numerous episodes of pranking people.  Because of a disagreement with the funeral home, they have to bring his late wife's corpse along for the ride, comfortably stowed in the car's trunk...most of the time. 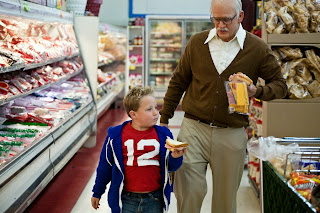 The pranks are very funny.....like when they decide to make sandwiches in a grocery store........ 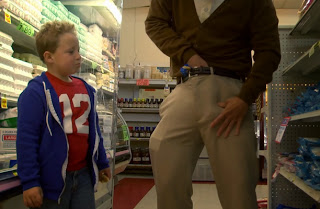 ........... they end stash the loaf of bread before fleeing when they get caught.
The pranks continue, some pretty raunchy, like when Irving gets his penis, named Leroy, caught in a Coke Machine outside a convenience store.   There are other scenes that display Leroy.....like in a strip club.  No such details are available here. 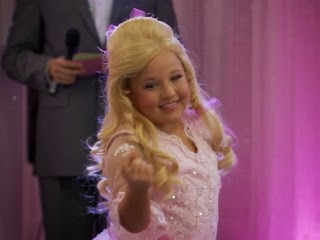 Along the way, Irving enters Billy in a children's beauty pageant where Billy dresses up in a Honey BooBoo...ish costume.

One hilarious part is Billy doing his talent portion where he sings "My Bonnie Lies Over The Ocean, which includes a strip and pole dance.
If you go see Bad Grandpa, stay for the credits which includes some very funny take-outs.  Grandma J liked this  movie, even though she thinks her son-in-law laughed way too much.....but so did she.  So, with that, and given the great job of acting by Knoxville and Nicoll, she gives this movie four and a half stars.

OMG....you are really enjoying the inappropriate movies lately. Is this a trend or just your real crazy self coming out???
I know Lolo wants to see this one!

I will have to wait for Red Box because I am not going to the movies for that... :)
So glad your movie reviews are back!

There's plenty of pranks to be seen here, but the fact that they're done in a very natural, very fun way, makes it a lot better than say something like Bruno, where the political agenda behind it all is front and center almost the whole time. Nice review.

So glad for this review - the trailer looked hilarious! I think we will have to go!!

I saw Johnny Knoxville on Live with Kelly and Michael. He talked about how many people helped him load the 'body' in the trunk of the car - amazing!

Just a fun FYI. Johnny Knoxville is related to Vol Fan. Very distant - like 5th cousins, 4 times removed or something silly like that. Apparently Vol Fan missed out on the gene that like to do painful things to their genital area that Johnny got! :)

Geez Louise! You and Vol Fan have loads of really cool cousins. Invite me to the next family reunion! I will even help with the refreshments.