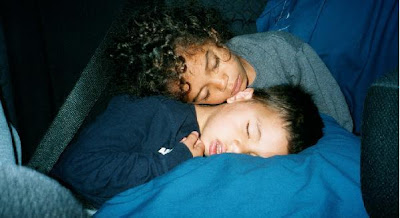 One of the few pictures I've ever taken that words don't do justice. I took this in the middle of the night from the front seat of a moving car on the way to Disney Paris.

...now for a splash of Big Brother rants.
Please raise your hand if you think Jerry is a total ass! After Dan tells "the Colonal" how much he respects and admires him, which was a stretch and very generous, Jerry rips him a new one! Dan was right, Jerry just bought Dan more sympathy and time. I think Jerry has an inflated ego.

Does anyone think Michelle was a bit over the top trying to pit Keesha against Libra? I mean when someone's down lets gang up and stomp on her.
Don't even get me started on April, the ho with the mo. Right now, Renny and Dan are my favorites. Memphis is nice, but riding the fence.
What's your take? Who's your favorite?

I love this picture!!! They look so precious.

Cute picture...Sorry I can never watch 'Big Brother'....Your Uncle Jack stories are 'PRICELESS"...seriously I look forward to them!

What a wonderful picture. Do you have stories from Disney Paris (you probably do and I've not read the archives).

I thought Dan and Jerry had to do with ice cream, but I don't watch a lot of TV.

Love the picture. I can't keep up w/ bb this time.

my metabolic rate, there is more Jack on the horizon.
CBW, ummmm you're thinking of Ben and Jerry's.
Disney Paris, was the best. Everything in English, employees, or as they refer to them, cast members, were pretty much from here. I met several from CA.

I LOVE that picture! Paris? You are exciting! I want to take Kaish to Disney World soon. He is getting so old. I keep hoping it will happen soon, but the money never seems to be there...

...great worldless...and you have shared Disney Paris with me already....esp camping and Mickey serving breakfast!

And, I am proud to say, Woodman has NEVER been to a kennel! First he would be so depressed...and secondly, it costs about the same to have a college student live at our house while we are gone and take care of everything, pets and all.

I whatched Big Brother twice at my Cousins in Texas, so now I at lease understand a little bit of what you are talking (writing) about.
It is good to be home. Right now it is 70 degrees here and feels like 70. I just check the temp. in Corpus Christi and it is 89 but feels like 101.
Being back at work is not bad, but waking up at 5:30 really SUCKS.

Make sure you check out Coop's blog. You are in the homage for his blogiversary. =) Meg

I've missed this week. My step son is over and the only grown up tv we have even watched revolves around the olympics...I come here for my updates. I'm sure we won't watch tonight either.. :-( By Sunday we'll be back on track.

Since so many are watching the Olympics instead of BB, I will do an indepth recap Thursday after the West Coasters see the live show. Even though I see it three hours before they do. It's 11pm here by the time they see it.

Ok...BB. I can't stand Jerry either. he's so mean and rude and I hope he feels like a big ASS when he finds out Dan's America's player and had to do what he did. I like Dan a lot. I like Renny too. I even like Keesha because she's a good player. Can't stand Libra, Michelle, or Jerry. It's getting good though...finally!!
Oh, and your grandkids are so cute. Watch out...sleeping pictures freak out Pumpkin!!

So adorable. Those two are gorgeous!