Now it was Pooper's turn to take the afternoon off to go gallivanting with me. I went to the school to take him and Beauty off campus for lunch. It was Chapel Day, and the boys have to wear ties, and the girls have to wear their jumpers....at least that's what Beauty wears. 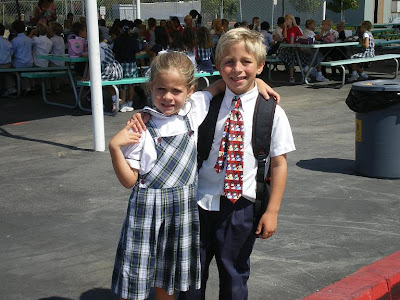 Aren't they just adorable? Pooper is a bit undone, but most of the boys have a hard time keeping their shirts tucked. 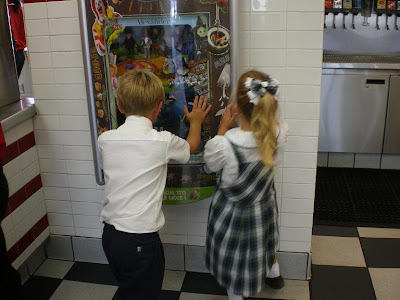 We went to McDonald's and they picked out the toy they wanted with their Happy Meals. 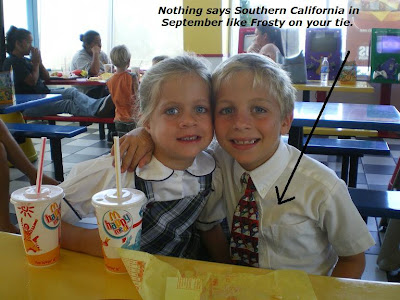 Then we sat inside and ate our lunch and watched TV.

After lunch, We dropped Beauty off at school and headed to Target. Originally Pooper wanted a lego Batman kit, was torn between Lego kits and Pokemon sets. I don't know, are they sets? I have never been able to understand a single thing about Pokemon....and believe me, my other grandson in Texas used to have a zillion of them, maybe he still does. 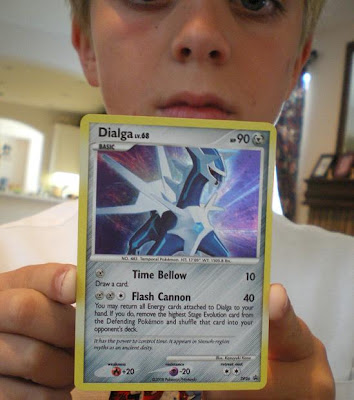 Pooper was extremely excited to find out his packet had two Dialga cards....a big one and a small one. He wanted me to take a picture of both, and of course they both look the same in the pictures. 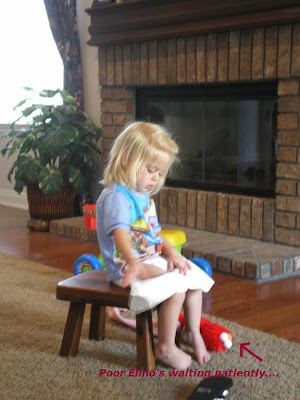 We bought Elise a Shake Me Elmo, and she is making a blanket out of diaper wipes for him.
Tomorrow I may head to the Newport Pier and do some people watching....eh hem....CBW

YES!!! PEOPLE WATCHING!!! People- with-no-shirts-on watching! Don't forget your camera, now, and use that zoom lens if you can't get close enough.

Your grandchildren are absolutely adorable.

So cute. It is so nice that you take the time to visit with the kids individually. They are so precious....Love the little one making a diaper.

Does Pooper and Beauty go to Catholic School? You can tell they really love one and other they way they hug.
Little One is so adorable.

Your babies are beautiful!!!

I don't understand that whole Pokemon thing either, but my nephew sure does!

Don't pick up any strange men at the pier tomorrow!! Be safe Grandma J!!!

I love the dates you are having with those adorable grandchildren : ). They are so cute. Each time I see them I think they are cuter. REALLY darling!

Guess what? Kaishon's first day was spectacular. I am just praying for 179 MORE spectacular days so I don't go insane this year.

Grandma..that is a VERY cool Pokemon..you were a Rockstar to buy that "pack".

They are so completely cute!

It looks like you're having such a good time.