A WEEKEND TREAT...or in simpler words

I got a text message Saturday...which is the primary method of communication in our family. To be more specific, I received the message at 2:12 in the afternoon. Here's what it said:

"Mom, we're gonna see Role Model at the movies in 20 minutes, do you want to go"?

I was just finishing up washing my floors, so with a real sense of accomplishment, I said, Sure! 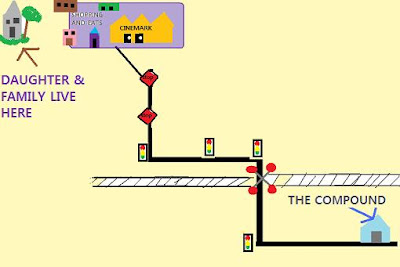 See this map? I must have gotten three text messages on my way to the theatre. I am a good driver, but I can't and won't text while driving. Isn't talking easier? Anyway, after traveling at lightning speed, I got there before the movie started. My granddaughter was in the lobby waiting for me, my son-in-law was buying popcorn, and my daughter and grandson were saving our seats. 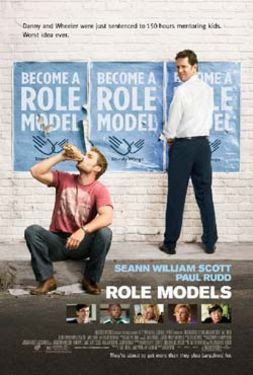 The movie....Role Model! Now, it's rated R and it's all about the language again.

Danny (Paul Rudd) and Wheeler (Seann William Scott) are reps for an energy drink company. They push there product with a "say no to drugs" type presentation to Junior and Senior High School students. 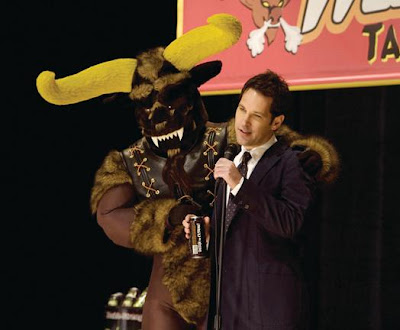 Wheeler plays the role of the mascot, and after ten years, totally loves his job. Danny gives the pumped up sales pitch and hates it. He has a meltdown at one school and basically tells the students the energy drink is poison. Of course they get kicked off campus and as they leave, they see their Company Truck hitched to a tow truck. 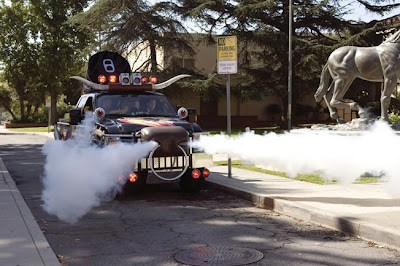 They have a bit of a scuffle, and end up breaking away, but crashing into a statue. Danny's lawyer-girlfriend breaks up with him but acts as their attorney. She keeps them out of jail, but they must do 150 hours of community service. If they don't complete it, they go to jail for 30 days.

The community service is at a Big Brother type of program called Sturdy Wings...the Bigs where assigned a Little to mentor. 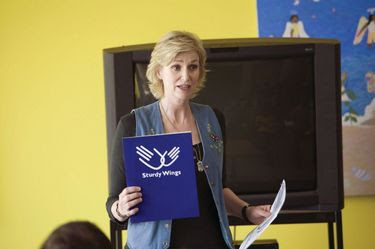 Jane Lynch is the founder, facilitator, and overall boss of Sturdy Wings. She singles out Danny and Wheeler and shows no mercy because they aren't volunteers, but Court ordered Bigs. She assigns them with the most troublesome Littles there. 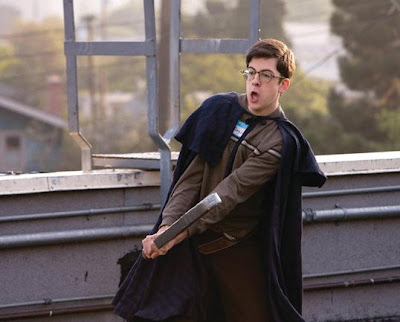 Christopher Mintz-Plasse is assigned to Danny. He plays a nerdy Dungeons & Dragons or Medieval Warrior type who is considered weird by his family who puts him in the program.

Bobb'e J. Thompson is a fowl mouthed wise guy who is an only child to a single mom. Wheeler is his mentor.

The movie is very funny, and raunchy...with a good measure of life's lessons learned. 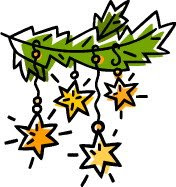 I give this movie four stars....

Wow! 4 stars...maybe I will see this one. After Madagascar, the new Bond movie...I need a gift card to the movies. Is anybody listening out there??? Good Christmas gift!

Sounds great. I really dig that company car they're driving. Looks like something I'd love to drive, especially with the steam coming out the "nostrils."

I kind of wanted to see this to see if it depicted the Big Brother program well.

I am glad it was funny! I am glad you could spend time with your family at the movies.

PS I am glad you are a texter. So many people I know, over the age of 35 : ), are not texters. It is so easy and a great way to communicate.

The movie sounds funny and good for you getting your floors cleaned. That is the ONE thing I did not do this weekend.
Hey, Grandma J and Rebeckah...I don't text. I am over 35. What is the dealio?? I don't know how to do it. I don't even have the capabilities on my phone.
Gotta go and saddle up my dinosour to take the kids to school.

1. Good job you little map maker! Now anyone who wants to can come stalk you! (J/k)

2. My mom will be glad to know that you don't text and drive. She's been on me about it since she saw a Dr. Phil talking about it.

3. That movie looks cute. I'll have to check it out since I'm a Big myself - well sorta. My Little moved away

We plan to see this on Friday. I'm definitely going see it now that I see you've given it 4 stars! I love how you broke the movie down without giving it away.

Have An Awesome Day!!
Thank you for following my blog! I'm truly honored!

I hadn't heard of this movie before reading your review, but I will have to check it out. The poster REALLY made me wonder...:)

Deb, I'm keeping my fingers crossed for movie gift certificates for Christmas too. JJ gave me several for Mother's Day...but I ran out. JJ? Just remember dude, Grandma J doesn't make you put gas in the car when we go on our missions to keep the neighborhood safe.

CBW, I knew you'd like the theme truck..especially the steam I really thought the nose ring would be your favorite though.

Rebechah, I don't know if the BB program will meet your standards. The Administrator is a recovering coke addict and ex-con. Not much of a role model. I've gotten pretty good at texting now that I have a phone with a Querty keyboard on it. Besides, I didn't have a choice...it's the only way some people respond to me.

Suz, you better learn to text because you'll wake up one morning and that will be the only way your forward thinking girls will communicate with you. No kidding. Just get yourself a new phone with all the bells and whistles. You can even update your blog from your phone while you take your four mile hike, or while you're out and about anywhere. I also got GPS which also searches out stores, restaurants and gas stations by type and price.
You didn't do floors, but you did windows! That's a huge job.

Cortney, the movie is funny, but has tons of language similar to Soul Men. That's why they were both R. I can't text when driving, it's too distracting and does effect the way you drive. I can easily spot a texter. You can't text or talk on your cell in CA..hands free only, which rules out texting.
I'm sure you are a much better Big to your Little than these guys in Role Model.

Tabby, I like to give thorough reviews without crossing the line and ruining it for potential movie goers. I personally try not to read reviews because I end up going in with a bias one way or the other. I do like to see how the critics rate it though...and quite often I don't think we saw the same movie.
Thank you for visiting my blog!

Big Hair, The movie was the second most popular this weekend, right behind the James Bond movie. Yeah, the poster indicates the juvenile mentality of the adults in the movie. Still pretty funny.

My husband really wants to see Role Models, but since he's picked out the last two movies (and the only ones we've gone to in like a year, and I hated those) I chose 007 when we got to sneak out on a date this weekend. 007 was pretty good. Daniel Craig is hot. Which is really why I chose that over Role Models. =)

Four stars.....I have been wanting to see this and your review just made up my mind...I'm going!!
Thank goodness for texting...wow what did we do before that, and cell phones, and fax machines, and the internet.....oh, I feel so old!

It looks like a cute movie. We decided this year on Christmas we will be taking the kids to a movie.