Hey, Take It Easy
....those are my tax dollars you're wasting 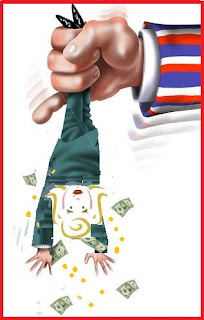 As both of you know, I was a Civil SERVANT for almost thirteen years before I threw in the towel  retired.  But, for a zillion years before that I worked in private industry....retail to be exact.


Even though my boss at my County job, :::hi loxandlo::: was very frugal and wise with the taxpayers' money, not all government employers/employees were.  I know, I've just shocked the bee geezus out of you.  Anyway, my specific duties where purchasing and inventory control.  My background in retail, where my main job was to generate a profit for the company, was a plus in cost control as a Civil SERVANT.

So, when Grandma J sees a government agency pissing away spending the taxpayers' money like a drunken sailor in a wasteful manner, she goes bananas. 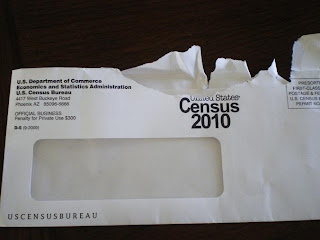 click on picture to enlarge
This envelope came in the mail this week.   Grandma J was so excited because she can't wait to fill out her census stuff so her great-great grandkids can check the census records in the year 2090 to find out how Great-Great Grandma J lived.  You know, how she had tons of cute male servants, and she wore a size 4.  They could read about how she would have won the Olympic Gold in the Woman's Downhill Slolum if only she hadn't missed her plane.  All the cool stuff we like to find out about our ancestors. 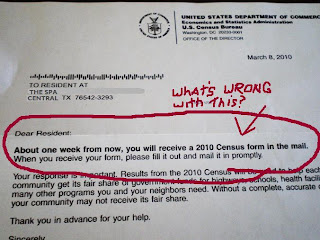 click on picture to enlarge
But then Grandma J read the enclosed letter.....  What's up with this?   They send out a letter beforehand to warn us about another mailing that's coming in a week?   They do this for  315,534,716 Americans?  That's three hundred fifteen million, five hundred thirty four thousand, seven hundred and sixteen.   That includes the 35,000,000 who are uninsured.

What does this do nothing mailing cost?  Because there are ten thousand people hired by the Commerce Department to work on the census, and some of them will come knocking on your door if you don't fill out the form, or if you try to impress your great-great grandkids by telling them that you have six bathrooms, nine and a half kitchens, and a herd of llamas in the backyard.

Does anyone else think this pre-census letter is a total waste?  Or do you think Grandma J is off her rocker?

Of course it is wasteful. I got the letter, and then the next day I got the census form.

I was a good girl and filled it all out. My sister, who lives across the street hasn't received hers yet.

Yes, we got the warning letter too. I think it is just ridiculous!


You have a herd of llamas in your backyard? Wow! How cool is that! :D

Well, maybe we are related afterall...because I opened the letter (as you, eager to see what personal questions they were going to ask)...only to find that it was a pre-letter...and immediately I thought, "What a WASTE!!" I looked to see what postage rate they used, with every intention of doing the quick math to see how much further into debt they were plunging my great-great-grandkids into...

Maybe when our future generations read the census, they will not only know I had 6 toilets, but they will know that we sent extra letters, (to keep the P.O. in business???) ...and then they might have some sense of how they inherited a big giant federal debt (that is, if they arent yet Chinese citizens!)

By the way, updated my blog with fun chocolate activities..and the machine is on HUGE sale this month, check it out.

WHAT? Are you serious? This is the sort of thing that drives me CRAZY! Perhaps they wanted to send these letters out to give the post office more to do because don't you keep hearing about how it is losing money all the time and the government is cutting postal workers left and right? It all confuses me. And makes me sad. Very, very sad.

YES!!!!!
This is so funny GJ because I was just sitting down to write the exact same post. 49 cents postage stamp times a zillion people living in the US, that's a lot of money. We don't have money to pay our public employees these days in CA, where is ths money coming from. UGH! No wonder we are in the state we are in.

Wait. Grandma J. has a herd of llamas AND cute male servants? I'll leaving now, will be there in a day or so.

I did the same thing with my letter. I set it on my desk and opened after the kids went to school so I could fill it out (I was hoping for little bubble circles to color in)---and it was that letter saying to wait for another letter.

No you are not off your rocker, I had this exact conversation with someone yesterday. WHY would we as a country on the verge of a depression spend all that money to tell people that the next week will bring a census form .. on top of the $$ spent on TV commercials doing the same thing. GAH ...

Geez, I glad I'm not the only one that was a little ticked off about the waste!!

Typically, only 25 to 35 percent of people respond to a survey sent by mail. Sending an advance letter increases the response rate by 10 percent or more. However, I'm not sure that the cost of this letter was worth it, given that they are also advertising everywhere. Why not just send the real census survey and then follow up with the people who didn't respond?

My pre-census letter is still on the counter. I won't open it now...maybe I can send it back to same some money? I think it is crazy...and with all the commercials too. Just wasteful. What are we gonna do Grandma J???

OH, NO! You are NOT off your rocker! Never! Not YOU!
I dunno what that's all about but, maybe since the federal government runs the post office, ("owns" if you will), they don't have to "pay" postage?
Ah, crap. Who knows?

Gramma J..
I'm with YOU on this one..as are most of our fellow bloggers..
given that more than half the folks up there in DC are former potheads..it is no wonder they have to send a pre-letter to remind us the real one is coming..and then you can bet we'll get another asking did we fill out the census form..
maybe it is to keep the post office busy, now that they have revamped the offices, installed new equipment, redid the sizes and weights of mail, and raise the cost of stamps annually in May..
who knows..but I am broke..
so I'm coming to your place to watch the herd of handsome servants with the llamas in your back yard..
warmest hugs and laughing smiles!
Loui♥

Long time lurker, first time poster. I just have to say that I love your sense of humor!

The government is wasting money? Say it isn't so!

Long time lurker, first time poster. I just have to say that I love your sense of humor!

The government is wasting money? Say it isn't so!

See, that's just it...the Gov't thinks we're all idiots & can't fight our way out of a wet paper bag w/o their help. We can't take care of ourselves & get our own health insurance w/o the Gov't forcing us to do it...So, they'll use MY $$ to pay for insurance for the deadbeats who won't do it themselves.

(sorry. off topic...I couldn't help myself.)

You have GOT to be kidding me!! What a colossal waste of time and money!!

Now, about those cute servants...

You are not off your rocker. We got that letter to and there was much conversation about it at the Little House. What a waste of money. Or is this a way of keeping the post office working? Cents less I say! Do you know how much wine we could buy for blog fest with that money????
<><

We are with you Grandma J. When that stupid letter came all I could think was "what jackass in government is getting paid to think up such waste". You can bet they are making more $$ than us!

Are you going to fill out your census form?? The questions they're asking really bug me. I could care less about a relative in 2090...I'm guessing the world as we know it isn't gonna be here then anyway.

I wondered about this too. Like all the ads on TV and the radio aren't enough?!

...no letter here in CA...no cencus form either...but the commericals on the radio are S-T-U-P-I-D!
lMnop

Hi Grandma J.
I got that letter, but yesterday, I got a post card giving me a phone number to call, if I need help filling out my census. Do these people think that we are complete idiots.
Carol

When I completed my census forms yesterday I mailed the pre-mailing back to those dopes! Made me so angry! What an insane waste of OUR MONEY!!!!