Don't Mess With My Stuff

It's his.....and it's his favorite, at least for today, and maybe tomorrow. 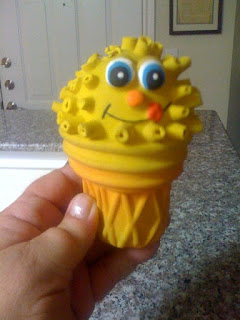 Even if he has chewed off all the pointy ends, and dismantled the squeaker.....it's still his, and it's his favorite toy. 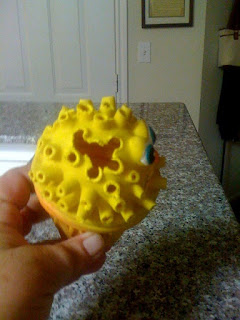 It doesn't matter that the whole dang top is just about gone, and the tips have all been eaten, and did I mention that the squeaker has been dismantled?  It's still his....and he wants it back  NOW! 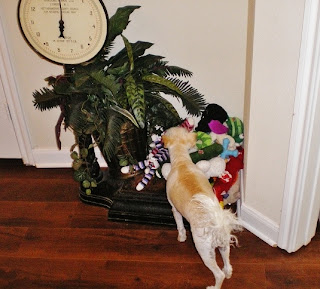 So, Grandma J tells the J-Man that his toy is in his toy box.   He actually doesn't have a toy box, but he used to, so it's still a term Grandma J uses for the place all his toys are located.
Actually, they are piled up on her antique scale and  JJ goes through them every day, as if he's counting them.   His favorite changes from time to time.   He's been known to find something very old and decrepit in that pile and treat it like it's a long lost friend. 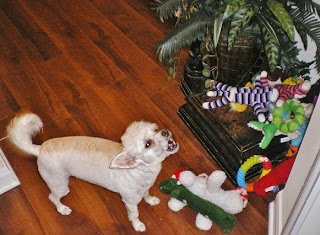 But today, it's his yellow rubber cone head toy that he wants.  And he can't find it, and he knows I had it....and he's mad as H.E.double toothpicks. 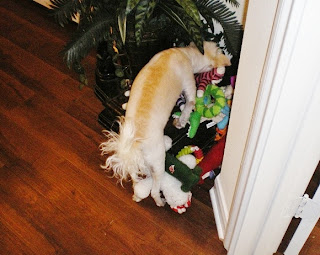 Grandma J put it back in the heap, but she accidentally buried it in the back.   JJ hunts, and he grunts while he hunts. 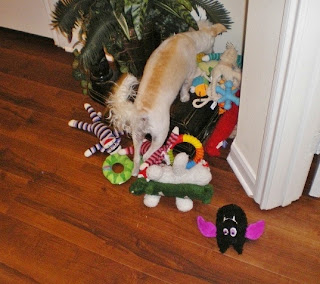 He's getting closer....and the toys are all scattered about....but he means business, and he's not a quitter.  He wants his toy. 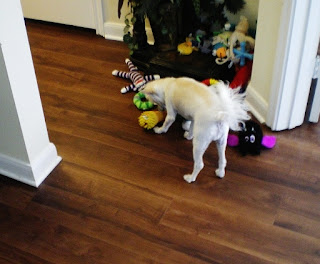 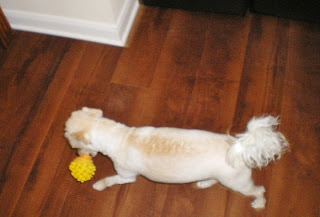 Before Grandma J can say, "yeah JJ", he darts off lickety split!  Does anyone else say lickety split? I didn't think so.   JJ never looks back, never pauses, not even for a brief second. 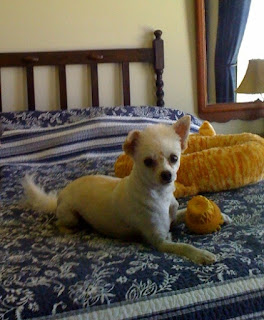 He retreats to Grandma J's bed.   His domain when the couch gets boring or when he wants alone time with his toy.  His favorite toy, for now.

He has you trained so well.
Nice comforter. Although I think the design should be in the shape of Texas.
m.

hahahaha! I love this post. My dog Max is the same way. He has a blue ball that he has the squeaker out of and has chewed to bits. It was so nasty looking that we got him a brand new one, exactly like the blue one except that it's green. He absolutely refuses to play with the green one. Ignores it completely if we try to throw it for him, and then he goes and get the old beat-up, worn-out blue one. hahaha! They know what they want! :D

The boy wants what he wants!!!! He has you under his thumb. I mean claw.
Cocoa has a new favorite toy each week too...Ozzie, well, he is kinda afraid of toys. :(

JJ has almost as much personality as grandma J! What a pair!

janet said...
Of COURSE I say "lickety split", cuz my southern father did. I love that term

OMG that is too funny. Especially the shot of him barking.

Awww..How could you ever deprive that cute face of a yellow cone head with no points or squeaker?! He looks so content in that last picture.

Of course he found it! You knew he would. The only way he wouldn't would be if it was outside... in a tree... and I'm still not convinced he wouldn't locate it. ;-)

J.J. would be good friends with my sister's dog Topper...he likes his toys...and when I mail him new ones he plays with them and then he hides them.

Hahaha. Jj is absolutely, without a doubt, the cutest ever! Lub'him!