This week is brought to you by the letter B 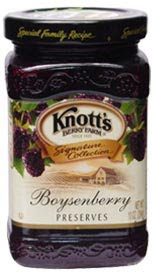 For Boysenberry everything....from  preserves, to pies, pancake syrup, juices, and even ice cream.

Even though every one and any one in Southern California loves Boysenberries and the foods made from them, Grandma J was shocked out of her gourd to find out that no one in Texas ever heard of Boysenberries! 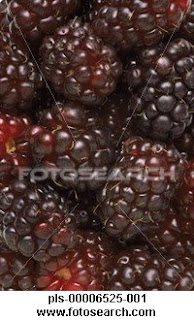 photo stolen from these people
The Boysenberry was introduced to the public by  Walter and Cordelia Knott of Knott's Berry Farm  fame in Buena Park, Orange County, CA.

Their roadside berry stand became so popular that Cordelia started making her pies, preserves and  even chicken dinners for the early motorist  traveling down Imperial Highway and Route 39.

These humble beginnings thrived into a major theme park where you can still get one of Mrs. Knott's famous chicken dinners. 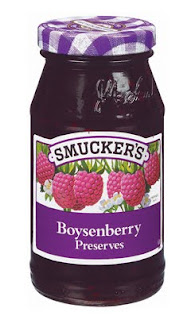 But, back to Boysenberries.  Smuckers and Kern's also make Boysenberry preserves and jams, but they aren't marketed in Texas, and probably no where else east of the Colorado River, or the landfill in Pico Rivera.

The same goes for Marie Calendar's and Mrs. Smith's   Boysenberry pies. Can't find a single one in Texas!

However, Grandma J  lucked out at her local IHOP in Texas because they have Boysenberry syrup!  Too bad Grandma J only likes maple syrup on her pancakes.

Now go check out all the other edible B's at A to Z Mondays.  Jen at Unglazed is the host of A to Z Mondays and would love to have you join us.

Email ThisBlogThis!Share to TwitterShare to FacebookShare to Pinterest
Labels: A to Z, Boysenberry

I have to admit I've never tasted boysenberries. I'll have to look for some jelly next time at the grocery! Pie sounds pretty good too with a scoop of ice cream. It's 4 a.m. here and obviously I am starving!!!

I've never had Boysenberry ever, but I'm willing to try it. :)

I've never even seen them in any market. Now I will be on a mission to find them!

I really like boysenberries! Our Village Inn has boysenberry syrup...at least they used to. I'm not sure now, because I don't really like pancakes.

When I saw your B theme, I really thought of bananas...I LOVE bananas, but not too ripe, and not too green!

I have heard of boysenberries, but I don't believe I've ever had any of them. They look a lot like raspberries or blackberries, both of which I have had. Happy "B" week to you! :)

I don't know that I have ever had boysenbaerries...but I don't think I've met a berry that I DON'T like!!

No boysenberries here, but those look exactly like our blackberries. They have to be related.

My mother has huge blackberry bushes in her yard, and every year when they get ripe she makes blackberry ice cream. It's outstanding.

Yum .. saw a Boysenberry jam in Zabars this weekend and almost bought it ..

I've heard of them just never had them.

I've seen the syrup but didn't know they were really a berry. I do love the way the name sounds though. Maybe I'll take that as my pen name: Caution Boysenberry.

janet says:
Yes, we have no boysenberries - but we have Dannon boysenberry yogurt, and Trappist boysenberry preserves...the yummiest. Like raspberries, but not as tart.

I have seen the syrup at the pancake house. Never tried it. I'll have to now cause them berries look oh so yummy.
<><

Happy Monday to you Grma J!

Happy B Monday Grama! Smuckers and Knotts are two of MY favorites too. Boysenberry always confuses my taste buds I must admit. Can't figure out what it is until I'm told. hehe.

I believe I have been boysenberry deprived! Not sure how to overcome the disadvantage! ("I'm a Citizens for Boysenberry Jam Fan" - Simon and Garfunkel, "Punky's Dilemma")

I have certainly heard of boysenberry before! But after seeing the picture of them I am wondering if I haven't eaten them before. We had a tree in our backyard that had berries that looked just like that and we ate them all the time. They were very sweet and yummy.
Do boysenberries grow on trees or smaller plants?

Grandma J you already know what my B is. Guess! You get one guess....did you get it right?

I've had things made with boysenberries. But never girlsenberries. ;)

Yep, when you said boysenberry I thought of Knotts...nothing like their preserves....grew up just a stone's throw away.

Did you pick any up on your last visit to CA. You should have your family send ya some. I like homemade boysenberry jam.

Grandma J
The only time I ever ate something boysenberry was at Ikea.It was good!

Those boysenberries bear a strange resemblance to our blackberries. I'll have to get Noe Noe's opinion, but I think she'll agree;)

I don't think I have ever had one. I am sure I would like it though... as there are VERY few foods I do NOT enjoy. Sad but true! I was reading this post on my phone at work this morning and my co worker told me that they are his absolute favorite : )

Have fun at your party tonight! SO excited for you! XO