A to Z Monday
.....the edible edition

Brought to you this week by the letter H for....

This is the stuff Grandma J's father used to call the Mystery Meat...or maybe that was Spam. Yeah, that's probably it. 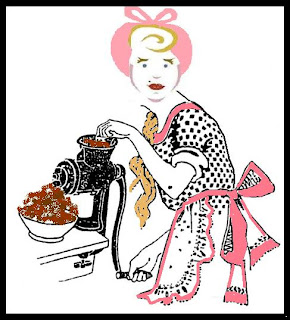 That's probably the reason Grandma J makes her Hash by grinding her own meat.  Well, she really doesn't, but her mother, Rita used to grind her own meat to make hash and other yummy dishes that required ground up meat.

Rita never said anything, but I don't think grinding up meat was her cup of tea because she wasn't a big meat eater, and confessed that she'd probably be a vegetarian if she wasn't married to a son of a farmer who loved meat.  Unfortunately Rita's husband only trusted the content of meat that was ground up at home....by Rita. 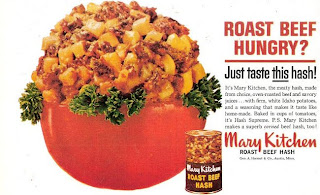 Grandma J is just fine with Mary Kitchen's canned hash....when she eats hash. But, not this tomato bowl.

Not so sure about Burns hash.  Of course it may not be this color in real life.

This isn't hash....but Grandma J loved the saying,  Food For Hollow Legs.  She also loved the little cowboys and indian with their weapons.   Just so you know, Grandma J had weapons as a kid, and she's sad that her grandkids can't get weapons as easily as she could.  Instead they just kick each other play video games. 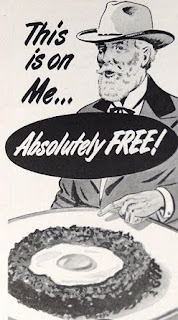 Grandma J has no idea who this man is, or what kind of hash he's serving up.  She just thought he looked like Kenny Rogers.  So, she's just gonna call this Kenny Roger's Hash.

Please rush on over to Jen's blog, Unglazed and check out the other A to Z Monday entries.   It's never to late to join in.

Email ThisBlogThis!Share to TwitterShare to FacebookShare to Pinterest
Labels: A to Z, Hash

I am like Rita, I prefer not eating meat but unlike Rita my man isnt a farmer or rancher .. just a Tooner ... and he can cook his own meat!

I think I might die if I had to grind my own meat.

I am so very, very sorry for Rita.

What is on the Burns hash? Are those eggs?

As for the Kenny Rogers guy: pre or post frightening plastic surgery?

My mom used to make the hash by cranking the old grinder, just like the one in the picture. Mostly meat and potatoes, as I remember it. Seems like I'd put ketchup on it, or something to give it some more flavor. A good ol' memory!

Happy Monday Grma J
You got me laughing again!
I make hash with left over roast and use my french fry cutter to for my potatoes. I've never tried it out of a can. Hmmm.
speaking of meat grinders....letter J is what we use that for. so stay tuned....

You are so crazy.
I am with woody...no meat grinding here. I actually prefer the tomato up there with NO meat.

where is my PETA membership card when I need it?????

I don't think I've ever had hash from a can either. I can remember my mom using a meat grinder to grind up ham for ham salad though. Fun post for "H." Happy Monday, Grandma J!

I remember eating hash as a kid. I think my mom used to grind meat. I have a meat grinder that will be sold at the sale, after I die. It will be marked, 'slightly used'! LOL!

My mother used to do the canned hash for my father and he loved it! You'd have thought she ground it herself!! She did about everything out of a can. I think one of the reasons was that Daddy thought it was modern to eat canned food. He liked modern things.:<) SHe'd brown it in pattys and Daddy would put KEtchup on them!! YUCKY!!

Ha! I remember the same hash as Ben wrote about.(We had the same Mom, so what do I expect?) What is it about putting eggs on hash? Like there isn't enough stuff in it to get your cholesterol for the day!

We were not much on hash around here, but one of my grandmothers did grind her own meat. She'd come home from the grocery store with her meat wrapped in paper straight from the butcher.

There were some college friends of mine who ate hash brownies, but I'm sure that's not what you're talking about here. And neither am I.

I hate spam. I love the Monty Pyton Spam song, and hash? Well no comment about that.....
H is for hamburgers!
hotcakes.
hamhocks--ham

Hash? Hmmm...never really been a fan of hash, partly because most people served it with over easy eggs. And we all know how I feel about over easy eggs...ewwww~

The first pictured can of hash is the same type that gave me a dreadful case of food poisoning close to 25 years ago. I spent a TERRIBLE night on the bathroom floor and thus ended my love affair with canned hash!

Honestly, just reading this made me nauseaus, gagging, and I even threw up in my mouth a bit. BLECK!

On the other hand....my blog is all about CHOCOLATE, which only makes people feel happy.

Im having a HUGE, HUGE Give Away...hurry over Grandma J....I know you want to win!!

Oh my. : )
I have to say, that has never been a favorite of mine. My Grammy loved scrapple. I suppose that is like hash. ICK! I liked it when I was little until my dad told me what was in it. Oh. My. No more : ) Gary and I were looking at this last night on the cell phone and he said, 'She always has the best subjects.' : ) He thinks you are a genius blogger. And of course, so do I!

I think I'd like hash if it weren't so salty! And I'm too lazy to make my own.

I love all the vintage graphics and ads.