FROM WHALES TO MARSHMALLOWS......

...which isn't a reference to me and John, or Gavin, or any neanderthal man. Hi Nick.

Well, I trekked by pack mule into the cozy little town of Skagway this morning to post about yesterday. The thought of Chesapeake Bay Woman selling the family estate to pay my Internet cafe fees on ship just for a picture of an old man made me scared for her children feel compelled to comply with her wishes. 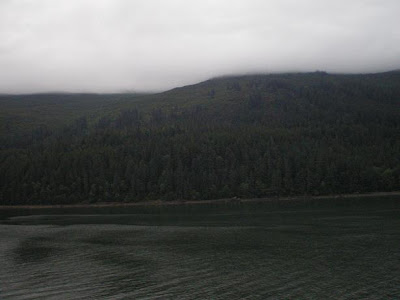 Tuesday was an early morning rise in Juneau, capitol of Alaska. We were up at six, and of course I headed outside to take a picture of early morning Juneau, then on to nice sit down breakfast at seven, then head on out for a day of whale watching, tour of the Mendenhall Glacier, a nature walk then a salmon bake.

While waiting for the dining room to open, I was pleasantly surprised to see Kristie, a fellow blogger. I'd started following her daughter’s leukemia journey in October 2005, right after my grandson was diagnosed. Thankfully, her daughter has been off treatment for almost three years…..yeah, Kendrie. 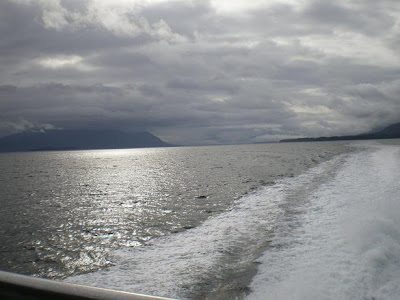 We went by bus to Auke Bay, where we boarded a tri-level catamaran. This is the sun coming up as we heading up the inland Saginaw Channel. The weather was in the high fifties which was warm for Alaska.

Of course John was thrilled to be up run

The girls were ready too. One nice thing is the boat had a snack bar with free beverages and snacks like bagels, salmon and pastries.

The tour guide would announce the sighting of a bald eagle, or hump back whale and the whole pack of tourists would scramble to the side of the boat with cameras and binoculars. 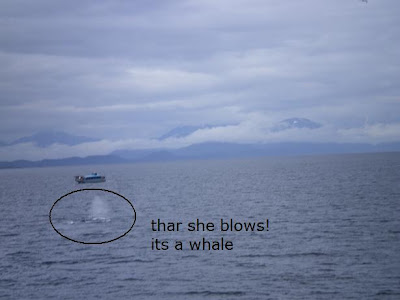 I caught a few pictures of humpback whales. 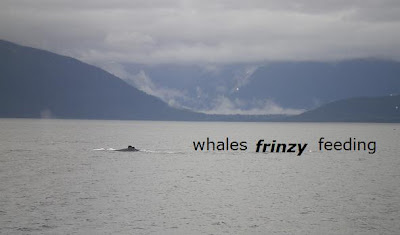 Today there were three of them having a feeding frenzy, which shouldn't be confused with Grandma J.in the buffet line. They were blowing bubbles underwater, causing the schools of fish to scurry away from the light and up into the darkness, which was the open mouth of a whale. The whales would surface as they scooped them up. The tour guide said it’s not that common for whales to orchestrate a “bubble feed”, and it was a rare opportunity to see. BTW, Humpbacks eat about a ton of small fish a day.

We saw Killer whales which are smaller and are actually in the dolphin family. They travel in pods, and are hunt prey twice their size, such as humpback whales. We saw quite a few killer whales, but they surface and dive back so fast, that it’s hard to get a good picture. I was going to draw one in with a sharpie… 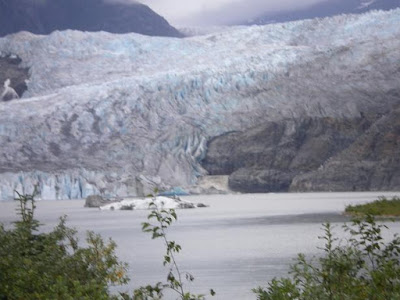 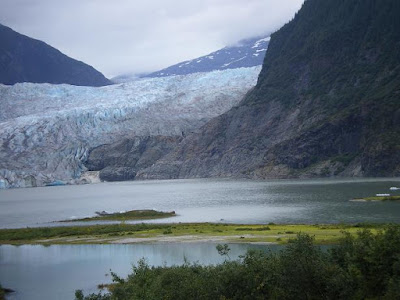 Next we headed to the Mendenhall Glacier. It’s a fantastic sight to see. There are waterfalls, ice masses, majestic mountains and bears…lots of bears. We weren’t allowed to bring food into the area because it attracts the wildlife.

We topped the day off with a salmon bake that included ribs, chicken, corn bread, wild rice, beans, salads and a marshmallow roast. We headed back to the ship in time for a nap before dinner. Tomorrow, Skagway. Life is good in Alaska

Thank you Postcard Cindy for the BB update. If anyone who watches BB and doesn't want to know what's going on, please be forewarned that this is the only way I can keep up. I don't have access to network TV. Sorry, Heartshapedhedges. Please don't put any ideas in Beauty's head. We aren't going to the American Girl Store this time around. We will have fun getting our pedi/mani and shopping. We also have a hotel sleepover and a Disney Birthday celebration with her BBF William. Carol Z, thanks, I can't believe I won the first week of the pool, and next time I invite you to come on a cruise....just know the boys will survive! I'm also hoping to connect with Pumpkin Delight sometime today.....You there Pumpkin?

Keeper, Claudette is a Family Court Judge. She's also a gourmet cook, which is much more impressive.

Keeper, Claudette is a Family Court Judge. She's also a gourmet cook, which is much more impressive.

OMG - those pictures are incredible. The ones of Alaska are great too.

What about some shots of the exotic crew members in muscle shirts hoisting up a lifeboat? How about that midnight buffet?

If you still need me to wire you some internet cafe money, let me know. In the meantime, thanks for keeping us posted. I only check back here about 4 times an hour. Oops 4 times a day.

What great pictures! I love the glaciers...keep em' coming!

Looks like great fun.. that is my #1 thing/place to go.. Alaska.. Have fun and take tons of pics for us stuck in Ohio..

Thanks for making me feel better about spilling the beans about the HOH competition last night! I hadn't even thought about giving away the news to anyone else. I guess when you work 14 hours and drink a glass of wine trying to get to sleep you lose your senses! I will keep you up to date! So beware any other BB fans (Kim) don't read anymore comments from me! Dan and Memphis are acting like they don't like each so they will each have Jerry on their side. It sounds pretty funny on the live feeds I read, obviously I don't have time to watch!

On a side note, you have no idea how happy I am you and Kristie found each other on the ship.

Love the pictures and your posts!

Wow! You kids are out of control. I don't think I could hang with all the excitement you are having!

Glad you are having fun!

The picture are wonderful. My favorite is the glacier.
I had this image in my head of the boat tilting a bit when everyone scatters to the windows to take pictures LOL.

It looks like you had a great time! I'm so bummed we didn't meet up. :( I emailed you too. Stupid cell phones.