Because Grandma J went to see The Ugly Truth today....due to the overwhelming consensus of her fellow bloggers. 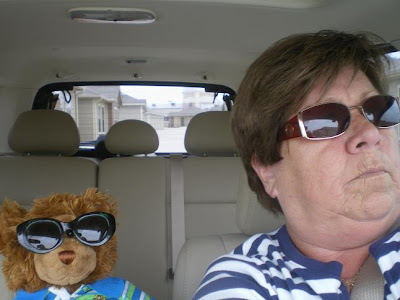 Phillip Johnny Bob was ecstatic going off to the movies with Grandma J. They hummed and swayed to show tunes on the radio as they made their way across town.....only to find out PJB wasn't allowed in the theatre because he was commando he was too young.

It was too warm to leave him in the car, so Grandma J took him back home to the spa. Of course she had to wait for the next show at 1:50....and had to pay the extra 50 cents.

Now, let's talk about the movie....The Ugly Truth, shall we?

Abby Richter (Katherine Heigl) produces a morning news/talk show, and is livid when her boss, who, wanting to boost sagging ratings, hires Mike Chadway (Gerard Butler), a raunchy (I'm loving that word more and more) late night TV personality who exposes the ugly truth about what men like about women. 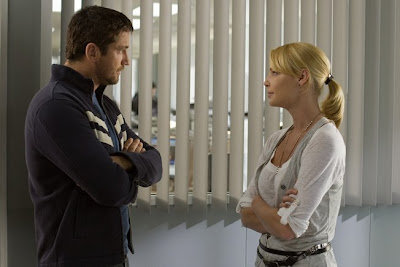 Abby is single and somewhat controlling. She can't seem to find "Mr. Right" and is not a fan of the advice Mike gives to his audience.

While Abby is appalled at the funny as heck blunt sometimes vulgarity of Mike's advice...her morning show's ratings soar, leaving her alone in her unapproval of the change in programming.

Mike torments Abby's inability to land a boyfriend, and she eventually takes him up on a bet to let him help her find her prince charming. 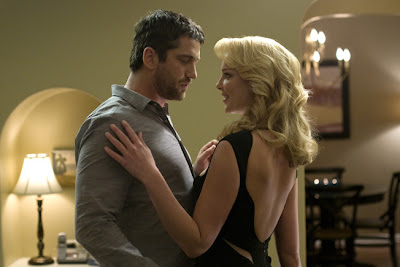 Even though the outcome is no big surprise, and predictable like most comedy/chick flicks, Grandma J still loved it for it's edgy, teasing, and steamy scenes.

I give The Ugly Truth five out of five bottles of wine....because that's what the blogfest attendees would want. 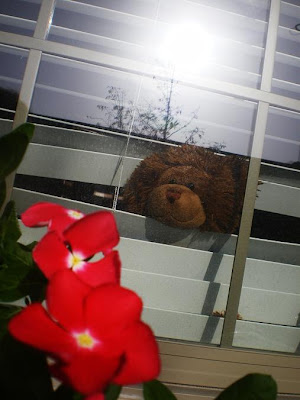 And look who was waiting for Grandma J when she returned home. Could he look more pitiful if he tried?


*note to Sue from the other side of Temple, across the bridge near the swim park......thank you for commenting. I take my grandson to a pitching/batting coach out on a piece of farmland off Jupiter Rd on your side of the bridge.

OK GJ, Little T, Cdub and I are cracking up!
Gosh we miss you!

So glad you liked it...5 bottles huh? I must see this!! PJB could not attend the movie? You must get a bigger purse Grandma J!!!

PJB looks happy, very happy, especially with Noe Noe Girl's shades. They were a perfect fit, and so stylish.

Raunchy is indeed a good word to have in the arsenal. "Rank" is even better, as in that raunchy thang stank so bad, it's rank.

What's this about PJB being denied access to the theater? Shall I send Gustav to clear this matter up once and for all?

Grandma J I think you need to come visit me in Wine Country even if you don't drink. You see I have this new kitten Milo that really wants to work on your hair. I will gladly give you and Milo the Master Suite here in sunny Sonoma! If you show up I can almost say for sure M will be here to! Really Milo is very gentle, I just hope you won't mind the other two cats Sophie and Lexy sleeping with you too. They are most anxious to meet PJB.

glad to see your getting back into the swing of things!

I can not believe they wouldn't allow him in the theater! That is just wrong...don't they know he is alive! He is not just a regular stuffed bear. Who do I need to call to complain?

Thanks for another great review as I really want to see this one.

Tell PJB that we love and miss him and you too!

While I am not a fan of Katherine Heigl, Mr. Butler looks yummy, er, hot, er ... well hot .. I think I will wait til this is on NetFlix and get Husband to put it on his queue ....hey get your minds outta the gutter .. its a list ...

Maybe PJB needs to stand taller so he looks older?

Is that the best you could do in describing the steamy scenes??

I need a little more description of those steamy scenes!!

OK that seals the deal. I'm going to be brave and put on my big girl panties and go and see the flick....BY MYSELF! That's right. If I can go all the way to Mathews,VA and hang out with the best of the best, then certainly I can handle a movie alone, by myself. Well that and Gerard Butler is inspiration enough. Of course, I have thing for men from any of the Commonwealth countries!

Oh and you could always get PJB some platform shoes? It might help. Well, maybe.

Five out of five bottles! I must see this.

Five out of five? Wowzers: ) I gotta see it. If you loved it I am sure I will too!

Loving the sound of this movie. Next year, we're either going to have to get a place closer to CBW or buy that house that's for sale on her street. Anyone?

I didn't read this all the way through yet because I'm going to see it in Tuesday, but I love Gerard Butler - he could sit in a chair on screen for the 120 minutes and I'd watch.
It looks funny and crude...looking forward to it.

Quick! Get that poor baby outa those venetian blinds before he strangles himself! He DOES get himself into some predicaments doesn't he!

Poor PJB. Glad to hear that the movie was worth all your efforts to see it.

a chick flick "socialably acceptable" for guys then huh?

Loved the movie! It was funny and crude, just how I like them! That GB is dreamy!