Hey Winston!
That's a cop car, not a chew toy! 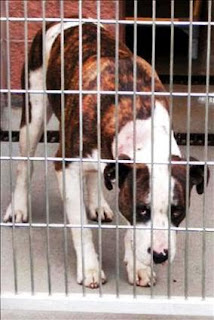 So off to jail he went.
A Chattanooga Police officer, while running radar at 1410 Workman Road on Sunday night, had his patrol car attacked by a ferocious bulldog.
Officer Clayton Holmes said he had stopped to work on a report when he felt his car shaking. He got out to investigate and what he found was a bulldog chewing on his patrol car.


Let's watch Winston in action, shall we?


For some reason, Grandma J thinks Officer Clayton Holmes must have done something to get Winston so riled up.

Email ThisBlogThis!Share to TwitterShare to FacebookShare to Pinterest
Labels: winston

Shouldn't have busted up that party just when Winston was making his move on his lady friend;)

I want to be Winston. Really. Really.

Oh I have never seen anything so funny. He just kept chewing too. I feel sorry for you however.

Me too. That is a little suspicious!

I wonder what was on the front part of the bumper to make the dog rip it that way ... they sure dont make cars like they used to

Oh dear! Poor Winston. Maybe someone told Winston to go fetch the car, and he was just trying to follow orders. HA! :D

Have a good weekend, Grandma J!

That is so funny! I loved that his friends were egging him on too. Is there more to the story? I wonder whose dogs they were.

Well, obviously Winston is a teenage dog and was showing his friends how to rebel against "The Man".

That dog is crazy. Imagine what he would do to my Dyson???

That Winston sure is a determined fella. He does look like he is showing off to his friends. ;-)

Saw this on CNN yesterday. The dog is now out of doggie jail and attended obedience school. Yes, you have to wonder what this officer did to annoy this dog so much.