Last night I was watching the Boston Red Sox slaughter the St. Louis Cardinals when my phone rang.   Yeah, I know it's a normal thing for most people but in Grandma J's world no one calls after 9 pm.....not unless  they want to borrow money it's an emergency.

The caller ID on Grandma J's phone said Huntington Beach CA.  That's it.   No name, just a number and the location.   This isn't a big thing, but it seem odd since she doesn't have any friends or relatives left in Huntington Beach....or so she thought.

The caller gave her name and asked if she was in fact talking to the person she called. Grandma J said yes.  Even though she didn't recognize the caller's name, she pretended she did. The caller then asked if Grandma J was the same person who graduated from Huntington Beach High School in 1964.  Now, this kind of question causes Grandma J's throat to have spasms and her eyes to roll back in her head....giving her the feeling the end is indeed near.

Without waiting for an answer to her question, the caller announces that Grandma J's high school class will be having their 50th class reunion in the spring of 2014, and would like to send her updates on the details of the event as they unfolded.

After breaking out in a cold sweat, Grandma J tried to wrap her throbbing head around the fact that she graduated from high school fifty years ago.  She then gave the caller her email address and street address.

This morning she got an email with a picture of herself from the yearbook.   The picture they are want permission to put on her name badge. 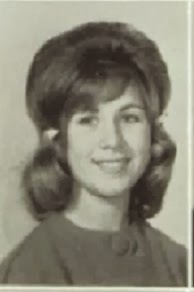 Grandma J has one question.....when did she lose her eyebrows?  And yes, all the pictures were in black and white.   It was fifty years ago!

50 years!!!!! What! That is amazing. Especially since you don't even look like you are 50. Are you going to go? Do you think you will run into anyone that you could make a new connection with? You were beautiful then and you are beautiful now.


Our 20 year reunion is this year. I don't really want to go because I am so fat.

The good news is that I was fat in high school too : ) so it won't be too much of a stretch! The bad news is that there are so many beautiful and skinny girls in my class.

Did I tell you that there were only 31 kids in my graduating class? There would have been 32 but my friend George got kicked out for going to the movies. Not a bad movie, just a movie. We weren't allowed to go to movies at my school.

Look at you! I love that photo.....you had Texas hair when you lived in Cali! ;)
I DO hope you go to the reunion; what a gift that would be. How many kids were in your graduating class?
Speaking of eyebrows.....I've noticed that mine look really thin in photos. So I've been coloring them in with a pencil. An eyebrow pencil not the #2 kind!
Let me know when you are going!!!
XO

WTF is it with eyebrows anyways...do they rub off on the pillow like little babies hair?

I do hope you are going!! You are just as skinny now :)

You were/are too darn cute! My brother re-met his current wife at his 40th(?)reunion. Maybe you'll get lucky too.

Oh wow! What a fun story. That picture is fabulous! So beautiful. So the question is...are you gonna go?

What a hottie!!! I cannot wait to hear some HS stories!!