I AM WOMAN HEAR ME SNORE...


My sleep study “sleepover” was something I asked for. Because when you retire and move to Texas you do things like that for excitement.

I wake myself up at night for no apparent reason, except to wake myself up. Once in a while I take advantage of the opportunity to go skinny dipping pee, or grab a snack.

Another reason is people say I snore. I have no documentation, and I wasn't sure I wanted to believe I could do such a thing, and if I did, who cares? But when my oldest granddaughter told me I scare the heck out of her at night, I thought maybe I did snore ….a bit.

So between waking up at night, and scaring the beegeezus out of little kids, I decided to submit myself to the humiliation of having my head all wired up, and a bunch of sadistic medical professional stare at me , watching my every move on a monitor all night.

What’s funny is some people are embarrassed by the whole snoring issue. I’m not one of them. I knew someone who refused to fall asleep on a transcontinental flight that was twelve hours long because she was embarrassed about snoring. Her husband would have to go to another room to get a good night’s sleep more often than naught. It was on the news one day that someone filed a complaint against a neighbor for snoring too loud……loud enough to be a nuisance. This made my unnamed subject paranoid, and we would tease her about her neighbors suing her.…yeah, we were bad.

On one overseas business trip for her husband, she did everything she could to stayed awake on the flight. She feared snoring and waking her fellow travelers on the flight. Once they got to the hotel, she fell asleep, but started snoring. Her husband had an early morning meeting with his superiors, and between jet lag and his wife’s snoring, he was getting ticked. Feeling bad, she wrapped herself in the bedspread, grabbed a pillow and went into the bathroom so her husband could get a few hours of sleep.

The bathroom acoustics were the worst case scenario. The tiled walls just amplified her snoring, making it even louder. Desperate to stop snoring, she decided to stuff toilet paper in her nose….I don’t know where this idea came from, but I’m sure she read somewhere that closing off her nose would stop the snoring. Well she kept packing it in, more tissue, then some more. It was so packed, that when she looked in the mirror, her nostrils where spread out, giving her a look similar to Miss Piggy. 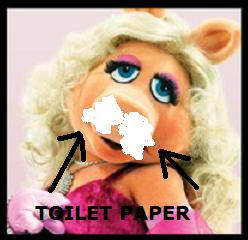 For whatever reason, maybe moisture, or the tissue tearing…..she couldn't get the tissue out. Without all the embarrassing details the bottom line was she had to wake up her husband. She had to wake him up to help her unclog her nose. He wasn't much help…..she had to go to the ER to get the toilet paper out of her nose.

OK Big Brothers fans! Here is a picture of Renny when she was younger. I was holding off showing it to you until they showed her Head of Household pictures. This one wasn't among them. 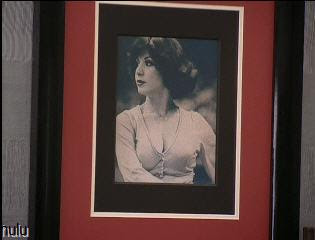 Are you losing a bit of respect for Renny? Is she purposely playing mind games with her alliance? I'm at a loss trying to figure out what she's thinking. What is your take on her strategy?

First, I must comment on your new hifalutin' blog...LOVE IT!!! You Go Grandma J!

My Mom just did a sleep study and now wears an alien face mask to bed! But she sleeps better and does not snore...

My mother has sleep apnea, and had to have a sleep study. She would stop breathing in her sleep, and a few times when I watched her sleep I would get scared because she would be so still. I'm afraid I have sleep apnea, but no one has really seen me sleep, so who knows. There's no way I could wear a sleep apnea mask though...haha.

Um, Im thinking that this "sleep study" is just the beginning...maybe I should get one done!

BTW, the picture of Renny looks like someone else I know, circa 1978, and her name is GRANDMA J!

Not to be confused with the Grandma J of the 60's who had "platinum" hair.

You have got to be kidding me. That sounds like something I would do (sleep on a bathroom floor and stuff toilet paper up my nose and then have to go to the ER).

Regarding the whole sleep thing, remind me what that is, because I haven't slept a good night's sleep in 13 years. Mine has less to do with sleep apnea and more to do with kids, animals, weather conditions, perimenopause and life.

Like I told you before Grandma, the book is going for his 2nd sleepover on friday. They told him after the 1st time that he has severe sleep apnea, don't know what they are doing this time. All I know is that I will have 1 full night of uninterrupted sleep.

The snoring story is funny. really, is the "friend" you??
Just kidding.
I hope the study provides some help for you.
My mom snores terribly, her whole life and I swear she does not get good sleep because of it.

My mom is a big time snorer but she doesn't believe it because whenever she asks my dad he says, "No, your fine."

I was recently told that I snore. However, I find it difficult to believe that he could hear me over his own snoring.

I think I snore too. Oh well. I hope the appointment goes well. For your grandaughters sake : ). I hate to think that you frighten her. I will be praying tonight!

I don't really snore, I "puff". Evidently, I blow little puffs of air out of my mouth at regular intervals. It has been a great source of amusement for my family and friends. It doesn't take much...

Grandma J, found your blog and you're hilarious! I'm going to send my GI JOE to get checked because he snores so bad I want to put the toilet paper up HIS nose lol. Renny is acting crazy this week huh?

I snore BAD..and I have to tell you I don't sleep on an airplane because of it, even overseas..which leads to a very tired MP.

BB: Renny is totally in game mode and I'm afraid it may be making a big ole target on her back.

That's a terrible story! But I liked it.

Apparently I snore, at least that's what I am told. No real proof yet!!
If it is true though, I now know not to stuff Kleenex up my nose! Hahaha.

I've tagged you come over and check it out ;)

I think the whole scientists watching you sleep thing would totally creep me out, but if it helps you, why not. My Dad had sleep apnea(sp) and did the sleep tests. They helped him a lot. He was a lot happier and so was my mom.

Don't feel so bad about your granddaughter telling you you snore. My family used to go camping a lot and one time after a "loud" night a little boy at another campsite came over and asked us if we heard the bear that night. The bear he heard was my dad snoring.

As for Renny, I agree with you. I'm on the fence with her. Why wouldn't she want April and Ollie gone? I don't know. At this point, I'm still rooting for Dan.

Just so you know, I got a cpap machine which saved my marriage, of which I am so thankful because it made me able to function. Also, I had gastric bypass surgery which saved my life. Now I am lighter and don't snore anymore. And Jack's nickname was Lord Fountelroy (sp?) and grandpa's was The Governor.

Aunt Julianne, were you the one with the toilet paper up your nose??

I snore, mostly only when my allergies are making my nose stuffed, but since Im sleeping, and My Honey sleeps sound as a rock, who knows?

We're a group of volunteers and opening a new scheme in our community. Your site provided us with valuable information to work on. You have done a formidable job and our entire community will be grateful to you.

I know this website gives quality based articles or reviews and extra stuff, is there any other web page
which provides such data in quality?

My developer is trying to persuade me to move to .

net from PHP. I have always disliked the idea because of the expenses.
But he's tryiong none the less. I've been using Movable-type
on a number of websites for about a year and am concerned about switching to another platform.
I have heard fantastic things about blogengine.net. Is there
a way I can import all my wordpress content into it? Any help
would be really appreciated!

Why viewers still make use of to read news papers when in this technological world the whole
thing is presented on web?

I used to be recommended this website by my cousin. I am no longer
certain whether or not this put up is written via him as nobody else know such precise approximately my difficulty.
You're incredible! Thanks!

What's up, I want to subscribe for this webpage to get newest updates, so where can i do it please help out.

Hello! This post couldn't be written any better! Reading through this post reminds me of my good old room mate! He always kept talking about this. I will forward this write-up to him. Pretty sure he will have a good read. Thanks for sharing!

My spouse and I stumbled over here by a different
web page and thought I might as well check things out.
I like what I see so now i'm following you. Look forward to going over your web page repeatedly.

Feel free to visit my blog :: water vacuum on tv

Valuable info. Lucky me I found your web site accidentally, and I'm surprised why this twist of fate didn't came about in advance!

Take a look at my web site: http://demo.phpfoxthai.com/index.php?do=/blog/22951/3-simple-steps-to-get-rid-of-belly-fats-for-good

Hello! I know this is kinda off topic nevertheless I'd figured I'd ask.
Would you be interested in exchanging links or maybe guest
writing a blog article or vice-versa? My blog goes over a lot of the same topics as yours and I think we could greatly benefit
from each other. If you are interested feel free to send me
an email. I look forward to hearing from you!
Fantastic blog by the way!

It's wonderful that you are getting ideas from this article as well as from our dialogue made at this time.

Here is my blog ... magnetized flashlights