Honestly, I wanted to make today a red letter day. The sky was clear, the sun was warm and the morning coffee was excellent.

I'm Catholic, and in Texas my parish is St. Paul Chong Hasang. It was established by a small community of Korean Catholics, and now serves a much larger community with most masses in English. I love my parish.

So here in Southern California, I chose not to go to the local St. Josephs, but I went to mass at St. John Paul II, which is a unique parish that caters to the Polish community. I never knew there was a Polish Community, but the parishoners come from all over Southern California. I loved the mass, and then the festivities they have afterwards with authentic music and food. It's become somewhat of a tourist attraction with all the Polish art, crafts and culture.

Now that I was all holied up, I attended a Little League Baseball game for my grandson Ryan. Just the thing I would probably be doing in Texas. He pitched, caught and played second base and had three grandmas and a great-grandma cheering him on! What fun!

Late afternoon we headed a few miles in the opposite direction for a Harvest Festival at another church. We had some good rockin' gospel music.....not unlike churches in Texas would have, and then we went inside the hall for some bingo! 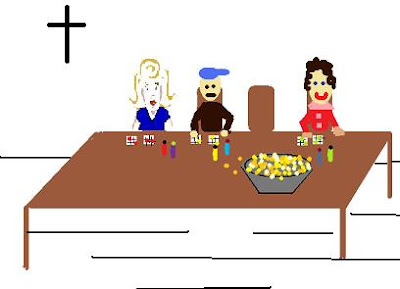 Yep, of course it was another Catholic church, because didn't they invent bingo?
I won two games in a row, each paying $30. We headed over to the beer garden for some more music, then headed home.

And pictures? I took plenty...but my memory card was in the slot on my laptop and not in my camera. I don't have my cable to download them.

So Sistas? When are you going to start circulating that Blogging for Dummies Book?

You lucky bingo player, you! Did you have to share with your son?
Sounds like you had a nice day!
We BBQ'd and watched football.

I think I need to get all holied up.

Your picture is priceless. You're hilarious.

Grandma, I think you will be the first recipient of the Blogging for dummass, I mean dummies book.

You are quite the multicultural magnet. The churches sound great and diverse.
Yes, I am sure the Catholics invented Bingo. My Mom tells a story about her aunt who was blind as a bat, deaf in one ear and needed help daily to just get by. But you can take her to church bingo and she can play 8 cards by herself!!! Priorities.
Glad you are having a good time.

Sounds like you are having a great time. Way to go on winning bingo. I NEVER win anything! And sorry you offended someone. It can get tricky. I read and offending blog last week (someone claiming that unless you do an Ironman triathlon you aren't doing a "real" triathlon). I could have launched into a tirade, but I found that little "x" instead and just left. To each their own.

What a lucky little boy - to have all those grandmas!!

Bossy likes Bingo. Especially if she's allowed to play more than one card at once.

I have never played Bingo, Grandma J! Never. When I was growing up-in a Baptist Church- they thought Bingo was bad. Something about gambling and such... Being the rebel that I was though, I always wanted to play! The Little League game sounds fun. I am glad your trip is so spectacular : )!

You are too funny! And yes, the Catholics did invent bingo!!

Ok so call me stupid but......three grandmas????
And I really think that picture you posted should be up on your frig.

Some people get to have all the fun.

Keeper, sometimes I refer to myself in the third person, not to think I'm cool, but because I like having another person around sometimes. It also gives me someone to get mad at.

Three grandmas is the new norm around here.
I can't put that picture on the frig because I'm growing a cactus there.

Keeper, you are so funny! I do third person speak too....and no you didn't sound bitchy. Your not bad. I'm the one just coming off blogger probation.

I will have to highlight my cactus growing on the frig when I return to Texas. It's an Arizona cactus, and was smuggled across state lines.

Grandma J, my next events - a half ironman triathlon October 5th and I'm considering the San Antonio Marathon (or half) November 16th. Right now I'm not fundraising. Trying to figure out which event I'll do that for next year.

Love the artistry. I haven't played bingo in sooo long.
Trying to catch up with everyone. Sounds like you are having an amazing time in your travels.

Dancing with the Stars started! Was hoping to see a nod before I left for Ros-hole. I loved the football player!

I've been to the Polish Catholic church- very small and quaint- love it!
Love,
Kelly

If you ever come to St Louis you will go to my parish...we're in the Italian community.
First Sunday of the month mass is in Italian.
We had our Britsh priest Fr Andrew said mass in Italian. The Decon was from Bagdad..how's that for a Catholic Stew :-)