TOOTLING AROUND SKAGWAY and.......

Skagway is a quaint little fishing village that gets inundated with cruise ships from May until the middle of September. 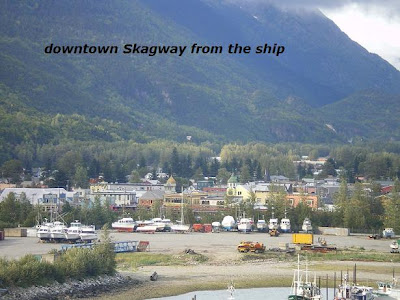 Then business slows, and the locals can hunker down or hibernate for the winter. Either way, I'm sure it's a mixed bag for them.

I think I mentioned purchasing five hours of Internet in Katchekan that worked in all three ports....except in Juneau, I was on an all day excursion so didn't get into town to hang out. But once in Skagway, I found time to post..... 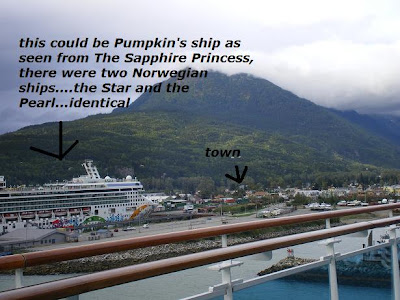 This is Skagway from the ship's deck. It's very small and is dwarfed by all the cruise ships. I never did connect with Pumpkin Delight, but I did leave her a voice message. Cell service was bizarre to say the least. I hope to catch up with Pumpkin, Jason, JLo and all the other goofballs bloggers in the LA area while I'm in So CA. 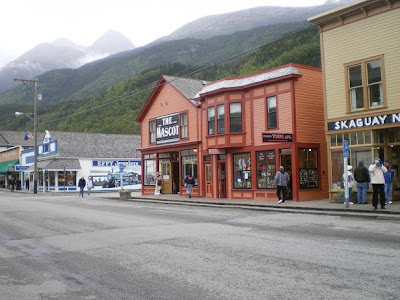 I loved all the shops in town, and stopped at a cute shop to buy fudge and some Victorian Vanilla Cremes for my travelling companions and Joey and Brian, our waiters every night for dinner. The gal that waited on me in the fudge shop was hugging and kissing her boyfriend, and after a few minutes, I started laughing...I mean it was bordering on rediculous, there were about four customers waiting to purchase candy. Finally her boss came by and said something to her. I ordered my two boxes of chocolates, and half pound of maple fudge. She put the Victorian Vanilla Cremes in two separate boxes for me, and of course my fudge. She asked if they could all go in one bag and I said sure. When I got back to the ship, I only had the fudge and one box of Victoria Vanilla Cremes. I called the shop (their number was on the bag) and told the manager. She said the other box was there and I could come back for it.....not!! She then offered to mail me a full pound to my home address next week when the fudge maker gets back. I gave her my daughter's address, since I will be in CA. I hope no one opens the fudge. She said he makes fudge every two weeks, so it will be supper fresh. I really appreciated her excellent customer service, and can't wait to get home and order some more fudge for Christmas gifts.
That evening, John and I had dinner alone because the others went on a land excursion that was delayed up some river without a paddle looking for bald eagles. 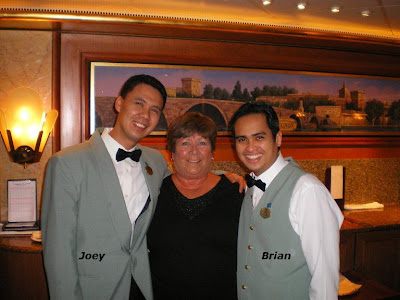 Here is Joey and Brian. Are they not the best? We had crab legs until we almost burst. They kept bringing more and more. We ordered a dessert called The Love Boat that was pure chocolate delight, shaped like a heart. Then Joey brought us each Cherries Jubilee!

The next morning we were at sea all day, travelling up an inward passage to Glacier Bay. 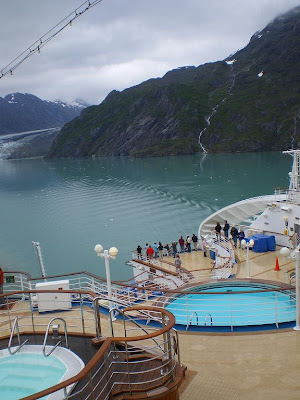 Here is a picture from level 18. You can see hot tubs on two separate levels in the foreground, and people looking at the scenery.

How about some pictures of different glaciers..... 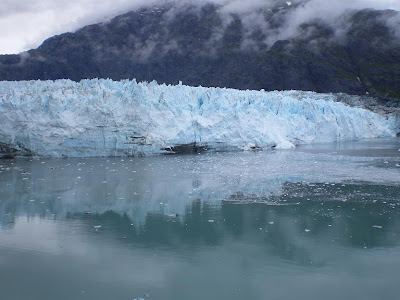 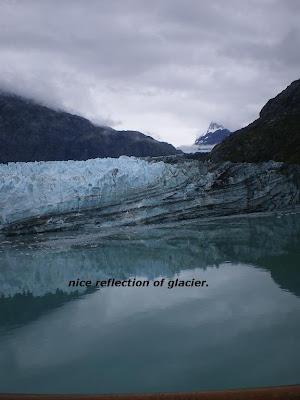 These are calfing....breaking apart and falling into the ocean...or sea, I get confused..... 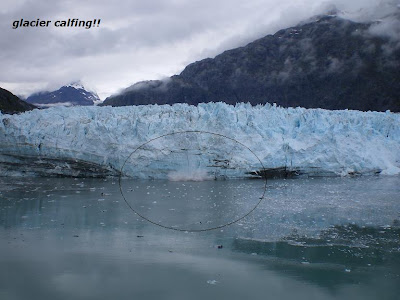 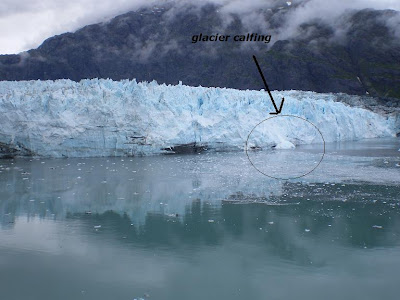 I'm currently at the Anchorage Airport, waiting patiently for my flight to Southern California...connecting through Phoenix in nine hours! I still have to post about our last night, but that will be coming in the next day or so. My little boy is picking me up late Sunday night, and I will spend the first day at his house before renting a car and trekking south to Heartshapedhedges.

Fudge is something I buy everywhere I go. Love it.
You and John. Dinner. Alone????
And ordering the heart-shaped Loveboat? Giving us something to talk about. Inquiring minds.

John is a former co-worker. Nothing more. We just happen to be the only two who didn't go on the excursion that day. he roomed with Jan. GJ

Glad you had so much fun (missing fudge aside!) What a beautiful place to be and spend time. Have fun in CA - weren't you glad you missed the drama of Ike in TX?

I think the kissy boyfriend in port should have just fallen in love with you and he could go on the list!! Love the pictures! Glad you are not in Texas right now :)

So...how many times did ya get lucky, grandma?

And, yes, I want to meet you for sure in the next couple weeks!

The trip sounds like so much fun! I am so glad you could relax and enjoy yourself with your friends. I am happy you get to spend time with your delightful children this coming week. I think your flight is already over now (it's 2:27 am) but I am going to pray for you anyway. Kaishon will not be praying for you with me right now since he is already fast asleep, but I will tell him in the morning, that you are off your boat and safe in Southern California!

Ha ha! I think that was my ship. I think I see me waving at you too. Boohoo. We were so close, yet so far away.

We HAVE to get together while you are still in SoCal.

Grandma J. you have all the fun. The Love Boat was surely the name of your ship, not your dessert, based on all all these men I see.

I've always wanted to go on an Alaskan cruise, and now you've just convinced me that I have to do it.

Enjoy your visit with your family and be safe.

Sounds like you had a great trip! Buying fudge while on vacation is mandatory! So funny...there is always a fudge shop in a quaint little vacation town! I love that!

You're not confused, you are just putting all of your focus on Joey and Brian.......and all of the other men!!! hahahaha! Has there been any Hot-tubbing???

You know how to travel right!!!!

Grandma J FINALLY made contact with me, and said (brace yourself)....she has many more men to write about.