**Sitemeter Kills Thousands Of Sites For IE Users **
I suspect it's save to go back in the water....at least we know who the culprit was. Now if Hollywood comes back I can guestimate where they hail from. :))

LIFE SAVINGS IN A NUTSHELL

This weekend started out crazy and hasn't stopped. I've been preoccupied with my new laptop. I did tell you about my new laptop didn't I? Well I used a jump drive to transfer my stuff from my desk top, then deleted everything from it before I took it to the dumpster. No one wanted it! A totally functioning Sony Vaio. Not the church, not the school district...and no I didn't ask my neighbors. Honestly that would be opening another can of worms. Besides, someone will take it...keyboard, flat panel monitor, speakers the whole kit and caboodle.

So, here's what I did, I moved all 3K plus photos into the new fancy shmancy photo file on the laptop. Then I made sure I had the latest v. media player on the laptop before I dropped all my albums in it. I watched as they all opened with pictures of the artist and album covers. Then I tested it. fine.

Today I was getting ready to listen to some music while blogging and while everything looks good...titles, play time blah, blah, blah, I get an error..something about not recognizing something or other. So I went and got all my CDs out of my car, that's sitting in 104 degree heat, so I can reload them from scratch. Don't I have this stuff on my MP3 player you ask? Why yes I do! I'm not taking a chance...if it didn't work from the jump drive, then I'm doing the next best thing to having the artists live in my apartment...downloading from the CDs.

All this blabbering brings me to this little gem I've been toting around for decades....my bank passbook. Yeah, I think that's the old fashion word for debit card. I remember showing it to my oldest granddaughter last year thinking she's say "ooooh..aaahhhhhh! Wow, can I have that when you're dead?" No, I got the usual look of "you are definitely a couple of bubbles off center." 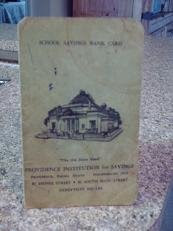 Now granted, it comes with a lot of history..as in coffee stains courtesy of Rita. I mean come on! If it wasn't Rita it would have to be Sister Annunciata Marie from St. Anne's School. No kidding, that's her real name. She made us say it in it's entirety every time we addressed her...or as she sailed into the classroom with her habit flowing behind her. I can still hear the class in unison.....

My friend Leslie Hamilton and I secretly knew the good sister was practicing her angel moves. Oh and Leslie?...she was adopted by this rich doctor and his wife. They weren't Catholic so Leslie didn't have to go to confession every Saturday...I envied her in oh so many ways.

Excuse the quality of these photos, but as you all know, I'm patiently waiting to make the cut on Santa's camera list. 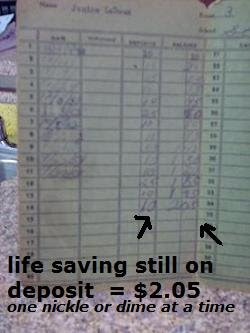 This is the balance as of around November 1954. The last three deposits aren't dated. You see, if you want your deposits dated, you have to write it in yourself. All deposits are in pencil...according to instructions. Don't you think that's crazy?

If any of you happen to be strolling down Empire Street, or South Main Street in Providence RI, stop in at Providence Institution for Savings "The Old Stone Bank" and mention my name. I'm like the oldest depositor they have...just maybe. And I think this is the extent of my wealth, all locked up in the third grade savings account.

Hang it there because I'm working on a post about my grandfather's desertion from the Army right in the middle of the War Between the States out west with Pancho Villa. No kidding. I will treat you to his Wanted Poster. Oh boy, I can see you, Carol Z getting all antsy. You've asked for this ever since you saw his wanted poster hanging in my cubicle eons ago.

Holy moly, you are old as dirt. well, almost. I wonder what the interest would be on the $2.05. have you tried to locate the bank?

Are all the entries in pencil for real? Looks like you did your own entries. With the good Sister's permission of course.
Can't wait to see the wanted poster. Was there a reward?

I'll try to contact Jason about the sitemeter. Thanks!

I haven't had any trouble with sitemeter.

But thank you for letting me know about my Ree blunder. Here I thought that The Pioneer Woman actually knew I existed. Oh, well. I think I like the new Ree better!

YOU THREW IT AWAY??

I remember when you bought that computer...I can tell you it's much newer than anything in this house. (remember, Im the one whose computer is so old, it doesnt support the software for my Kodak Easyshare camera1)

Your grandkids would have loved to have that computer...and now it's in the trash! HMPH!

I WISH I were in RI this weekend, believe it or not, it's the Dove Chocolate Convention......yummy!

and.....do you think your money is still there? Guess what happened to My childhood savings? I left it there, and didnt touch it for a period of time, So THEY TOOK IT. Apparently, there is some rule about inactive accounts, and if you dont have transactions, they take your money. I let the girl know that a child's savings account for college, was just that, SAVING FOR COLLEGE....they shouldnt expect TRANSACTIONS....I think it's robbery!

Maybe you can ask your new bf Nick for help with your computer. Didn't he just get the same one, or was that the other bf?
Good luck with that. I thought a new laptop would be wonderful, but it doesn't sound like you're having too much fun with it.

Computer transfers are a pain for me. One time I lost over 2,000 pictures doing a transfer : (. I used to love my bank book too. They were cool, weren't they?

HSH, I purchased my pc in 2001. Do you really think it would be worth sending out there? Packing and shipping alone would cost a fortune. If you computer is much older than that, and I think it's even older than my previous pc, then you must be typing your blog in DOS.
Just a bit of info to make your taxpaying blood boil....the life expectancy of a PC is three years. That's how often PCs are budgeted for replacement...and I should know!
Maybe you should take Jlo up on her offer to have a Dove party so you can earn some money for a Pc..I'm sure you can write it off as a business expense.
We didn't call my grandfather Mickey Free...that's what he called your brother Michael!

I am here!!! Guestimate where I am at. hollywood

Hollywood, you are a hoot. I had three visitors at 10:08 a.m. They were from these locations.

So, I can either take a wild guess, or hope that you come back often. Now if you are from PA, I wouldn't be surprised because you are gutsy..I like that. But with the name Hollywood? Ummm Probably Albuquerque because one of my daughters lived there and the fallout from Roswell, can do funny things like make people thing they are famous stars. Of course, being of French Canadian descent, I would hate to say anything negative...unless you insisted.

please come back again so I can narrow you down...and who knows? I might win a prize..right?

heehee...I LOVE LOVE LOVE it! I am a Real Estate Broker from Albuquerque (and raised in Roswell). My name is Holly, but my mom calls me Hollywood (apparently I am dramatic??? Not moi!) And my family is all from Texas and ask mom and apparently she claims I am too (there is some shame in her since I wasn't born there)

Hey Hollywood! You make me laugh! Thanks for making an honest man out of sitemeter. (I prefer to think of a bean counter as a man).
I love Albuquerque. My daughter worked at the Marriott a zillion years ago, so that's where I always stayed for free. And I visited often! She left about ten years for a promotion in Denver...where she remains, but as a high school counselor.
Texans love them some Texas, thats for sure. I've only been here a year, and miss the beaches of so ca.